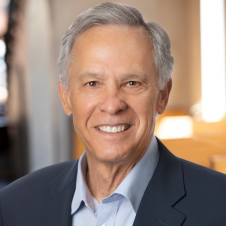 Kirk Humphreys is the Founder and Executive Chairman. He mentors the leadership of Humphreys Capital and chairs the Investment Committee. He brings 45 years of experience in real estate acquisition, syndication, financing, ownership, and disposition.

Kirk is the Vice-Chair of the Oklahoma City Airport Trust, a former director of OGE Energy Corp., a former member of the Board of Regents of The University of Oklahoma, and a former Trustee of the Urban Land Institute.

From 1972 to 1989, Kirk and his brothers owned and operated Jack’s Service Company, a national distribution business. After selling his interest in the company, Kirk focused his efforts on real estate investing. Kirk was twice elected Mayor of the City of Oklahoma City, serving from 1998 through 2003.

Kirk earned a Bachelor of Business Administration in Finance from The University of Oklahoma in 1972.

He and his wife, Danna, have been married for 48 years and live in Oklahoma City and Carlton Landing. They have 3 children and 15 grandchildren.